This play guide is a resource designed to enhance your theatre experience.

You will find information about the plot and characters within the play, as well as articles that contextualize the play and its production at Actors Theatre.

Professor Van Helsing, a notable expert in the occult, arrives at the estate of an old friend, Dr. Seward, amid whispers of gruesome attacks and strange goings-on. Seward’s fiancée, Mina, has recently died of a sudden and mysterious illness, and Mina’s friend, Lucy, has begun to display the same symptoms. Could it be that Mina, and now Lucy, have suffered at the hands of a vampire? How will Van Helsing and Seward fight this supernatural fiend?

In and around Dr. Seward’s sanatorium in Purley, England, and Dracula’s Castle in Transylvania. 1893.

To set her soul free, Dr. Seward (Kurt Uy) must drive a stake through the heart of undead Mina (Kayla Peters). Photo by Jonathan Roberts, 2018

Vlad the Impaler: The Real Dracula 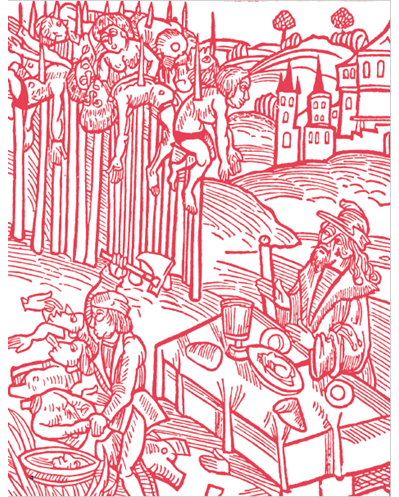 Vlad Dracula, later named Vlad the Impaler after his favorite form of torture, was a 15th-century prince who ruled with an iron fist. This infamous ruler controlled his subjects with such violence that he is now referred to as the bloodiest ruler in history.

Vlad was born in Transylvania in 1430 or 1431. His father, the warrior Vlad Dracul, was a member of a secret society of knights called the Order of the Dragon. This society was formed to fight and defeat the Turks, as well as secure the throne of Wallachia (a town located in present-day Romania). The Order brothers dressed in long green capes except on special occasions, for which they would wear long black capes and drape gold medallions stamped with the image of a dragon around their necks.

Young Vlad was nicknamed Dracula after his father. In Romanian, Dracul translates to “dragon” or “devil,” and the “a” stands for “son of.” So Dracula literally translates to “son of the dragon” or “son of the devil.” In 1444, Dracul was traveling with Dracula and Dracula’s younger brother across the Danube River when they were captured by the Turks. Dracula was imprisoned for four years. These years are thought to be the beginning of Vlad Dracula’s violent nature. It wasn’t long before Dracul was assassinated and Dracula’s brother was buried alive by Jamos Hunyadi, the ruler of Hungary. Fearful for his life, Dracula joined Hunyadi, who taught him cunning and severe military tactics that would soon secure Dracula the throne of Wallachia.

As Prince, Vlad Dracula continued to battle the Turks. Those taken hostage were impaled (i.e., large poles were driven through their bodies). But it was not only Dracula’s enemies who suffered. Many townspeople were also subject to his wrath. One story tells of Dracula noticing a peasant man who was wearing a shirt that was too short. When Dracula asked the man’s wife why the man was improperly dressed, she said she was too busy cooking and cleaning to sew. She was immediately impaled. Graciously, Dracula chose a new wife for the man. He made sure to show the new wife what had happened to the old one so that she would not make the same mistake.

Dracula died in battle in 1476. He was promptly decapitated by order of the Turkish sultan. His head was then sent to the sultan, who displayed it, fittingly, on a stake for all to see. Although gone, rumors of Vlad Dracula and his relentless temper spread throughout Europe. Stories of his villainy were published, read, and reread, and it was these stories that inspired Bram Stoker to create the character of the infamous Count Dracula we know today.

Bram Stoker: The Man Behind the Monster He was born near Dublin, Ireland, on November 8, 1847. Sick during most of his childhood, he read in bed a lot and liked to listen to the stories his mother, Charlotte, told. Her stories were sometimes spine-chilling, like the ones about victims of the 1832 Irish cholera epidemic who were buried before they were entirely dead. As he grew up, Stoker got stronger and even played sports and joined clubs when he went to Trinity College. He still liked to read strange stories, such as the influential 1871 vampire novel Carmilla, by Joseph Sheridan Le Fanu. Stoker wrote his own horror story, “The Chain of Destiny,” which appeared in a magazine in 1875. Stoker also wrote non-fiction. The Duties of Clerks of Petty Sessions in Ireland didn’t raise hairs on the backs of readers’ necks, but it was an important resource for other clerks in Ireland.

Stoker first worked for the Irish government, but loved putting his imagination to use and loved the theatre. In college he saw The Rivals, starring Henry Irving, and was blown away. The show inspired Stoker to write a theatre review column for the newspaper the Dublin Mail. Years later, he wrote a good review about Henry Irving’s performance in Hamlet, and the actor invited him backstage. The two began a close friendship, and Stoker moved to London with his young wife, where he became the business manager of Irving’s Lyceum Theatre.

Stoker continued writing fiction while working at the Lyceum. He published a collection of scary children’s stories called Under the Sunset in 1881. In the 1890s, he wrote some romantic novels, but was also working on his vampire thriller. Stoker painstakingly researched places, superstitions and myths while writing the novel Dracula. He visited many of the locations he wrote about in the book, including the Regent’s Park Zoo, where he observed animals that would appear in Dracula. Stoker stayed up nights discussing dark matters with his friends. Diary entries, letters, newspaper articles, verbal testimonies and other first-hand accounts form Stoker’s frightening narrative. He creatively used many fictional sources to make the story seem more authentic. When Dracula finally reached readers in 1897, reviewers generally praised it. They enjoyed its “ingenious and gruesome details” and how exciting it was for readers. Stoker had successfully written a thrilling horror novel that would terrify generations. He wrote other novels before he died in 1912, but none could compete with the legend he created in Dracula.

Dracula might seem like unlikely social glue, but sharing a suspenseful or frightening experience has long been known to build a sense of unity. Heartbeats quicken in sync, muscles tense, and it’s as if the whole audience is holding its breath—until you laugh when you and the person next to you jump at the same time.

Communal fear used to be only a survival mechanism, the spark of instinct we needed to run from danger or team up to fight back. Now we can scare ourselves senseless just for fun, and while watching a horror movie alone is spooky in its own right, there’s something special about experiencing a monster’s reign of terror together as it unfolds right in front of us. That’s why Actors Theatre’s production of Dracula has become an annual tradition for local audiences, including thousands of students.

Get ready to meet Dracula—and a theatre full of people who might become your new closest friends—by looking back at particularly chilling moments from recent years’ productions. But know that even bigger frights await you this fall. After all, what’s most scary is what you can’t see yet—because it’s right behind you.