Accessibility at The Wolves
Information to assist your visit
The Wolves

Get up close to the action as a girls’ indoor soccer team prepares for battle. Amid warmups and passing drills, the undefeated Wolves psych each other up—and dive into rapid-fire, unfiltered conversations about the world and their places in it. What happens when life both on and off the field tests the team’s endurance? A finalist for the Pulitzer Prize, The Wolves boldly celebrates the grit and grace of 21st-century American girls. The Wolves set throughout the play

An indoor soccer field somewhere in suburban America. The field is AstroTurf. We only
see the field: no goals, no bleachers.

Strong language and discussion of sex.

#2 (Defense)— Innocent. Unlucky. Cares a lot about other people, but doesn't always know how to help.

#7 (Striker)— Too cool for school. Sarcastic. Prone to swearing. Pushes against society's expectations.

#14 (Midfield)— #7's insecure sidekick. Just switched to contacts. Wants to forge her own path, but doesn't know where to start.

#8 (Defense)— Childlike and determined to stay that way. A little ignorant of social issues. 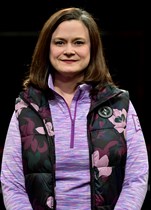 Here are a series of options you have while attending The Wolves:

*If you choose to leave the theatre during the performance, you may return to your seat whenever you are ready and when the house manager says it is OK.

— Before or when the announcement is made, return to your seat. Watch the second part of the show.

— If you wish, applaud during the curtain call when the actors bow
— Exit through the Mezzanine level
— Or stay seated until most of the crowd has exited to the lobby and then leave at your own pace